The Olive Pit is located at 16365 Bolsa Chica St. in Huntington Beach, California which is very close to Long Beach, California.  Their restaurant proudly serves fresh Mediterranean food that is sure to make anybody salivate when waiting for their dish.

The Olive Pit is owned by Chef Yianni Koufodontis and his partner George Makridis.  The first Olive Pit was opened in Brea, California in 2008 and was such a big success they opened the Huntington Beach location within a couple of years.

Chef Yianni has always loved cooking and considers it an art form.  He grew up cooking with his mother and grandmother and could not wait for family gatherings.  He received his culinary training in San Francisco at the famous California Culinary Academy.  Through the years he has worked with many famous chefs as well as on the team of Chef Wolfgang Puck.  He bought into his first restaurant just two years after graduating and never looked back.

Yianni’s passion for fresh Mediterranean food has earned him a reputation in Southern California.  Is it any wonder people travel for miles to enjoy his cooking?  He has seven hundred and twenty-seven positive posts on the internet with a four-point-four-star rating.  That is very impressive.

Located at 1804 Ximena Avenue in Long Beach, California is The Halal Guys.  Their specialty is gyros and chicken.  They are one of the fastest-growing chain of restaurants with restaurants all across the United States as well as in Canada, Indonesia, Malaysia, United Kingdom and South Korea. 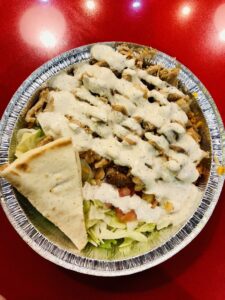 They got their humble beginnings in 1990 when the three Egyptian founders opened their first hot dog cart in New York City.  Seeing that there were a lot of Muslim taxi drivers, they switched their cuisine to Halal food.  Their menu focused on gyro over rice, crave-able sauces, platters of chicken and falafel sandwiches.  As their reputation grew, Americans were hungry for new exotic foods and found theirs to be amazing.

Once they settled on the name The Halal Guys, they decided the next move was to franchise the business.  They knew that people from all walks of life would love their one of a kind tastes, flavors and textures.  They have over five hundred reviews on the world wide web with a four-point-two-star rating.

George’s Greek Cafe started their flagship location at 135 Pine Avenue in Long Beach, California.  They have since opened two other restaurants one is located in Belmont Shore and the other in Lakewood, California.

George’s Greek Cafe has a beautiful courtyard that can hold events with guests from twenty to four hundred.  It is a popular place to get married, hold family gatherings or just have a great party.

George himself was often seen at his restaurants hugging patrons and engaging them in humorous conversations.  Their happy hour is popular with specialties like lamb chops, greek salad and hummus.  They have over twelve hundred evaluations that give them a strong four-point-five-star rating.

This article has been brought to you by SC Air Duct Cleaning.  They have been doing air duct cleaning Long Beach for years and have hundreds of happy customers throughout the Los Angeles and Orange County area.

No comments to show.